In need of some inspiration for your December shopping? We’ve selected some bloody great gifts. Let the games begin. Period!

From the US: The Period Game

Every turn begins with a player spinning one of the two ovaries. When a red marble comes out, you’ve got your period and are ready to play… Students of the American Rhode Island School of Design Daniela Gilsanz and Ryan Murphy developed The Period Game, a board game that teaches you about what’s happening within the female body during your menstrual cycle. While playing, participants get comfortable with using words like ‘period’ and ‘tampon’. Land on PMS? Play the ‘took a hot bath’ card to continue. But beware: when suffering a leak, you have to go to the equivalent of Monopoly’s prison: the school nurse. You can buy the game online (for exemple via Amazon) and in the MoMa store. 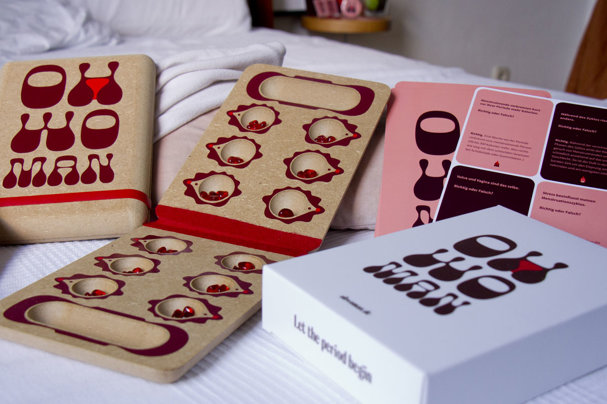 A game for everyone who wants to learn more about female bodies and menstrual cycles. Oh Woman is the game that clears up and thus playfully dissolves myths about the female body – no, vulva and vagina aren’t the same thing – while removing taboos around periods and female sexuality. It imparts knowledge with fun and games – and knowledge gives security! So #lettheperiodbegin! This game is designed by Stephanie Renz and Tania Hernandez from whatthefish.studio. After a successful crowdfunding campaign, production has now started. If all goes well, you can play it from the beginning of 2021. More information here.

This conversation starter (in Dutch, translations will follow in 2021) teaches you anything you need to know about the female reproductive system and sexuality. Apart from that, it’s also a great conversation starter about love and sex. Round 1, where you have to answer questions like ‘Can vaginas ejaculate?’, is all about knowledge. In round 2, you’ll get to share your opinions and experience with the other players while discussing the different theme cards. De Yoni Matrix is designed by the Amsterdam sex shop Mail & Female – well-known for their female friendly toy collections and Love Academy workshops – for their 30 years anniversary. Order here.

Forget about Candy Crush. In The Tampon Run, you’re helping Luna rid the world of menstruation haters by throwing tampons at them. This game was created by Sophie Houser and Andrea Gonzales, high school students from NYC who found it ridiculous that in modern society violence and guns are considered less of a taboo than tampons and menstruation. When playing, it’s pretty much collect, shoot and dodge. But beware of the Big Red Wave and make sure you don’t run out of tampons or else it’s came over. Download it in the iTunes store.

Toni the Tampon is a kid-friendly colouring book, designed by menstrual health educator Cass Clemmer (aka The Period Prince). Less educational, but instead focussing on the adventures of Toni and her friends: Marina the Menstrual Cup, Sebastian the Sponge and Patrice the Pad. Order a copy via Amazon.

The colour you’ll use the most when colouring in the illustrations of the Period Coloring Book? Probably red. Canadian public health practitioner and sexual health advocate Andrea Yip came up with this book full of illustrations, from pads and menstrual underwear, to period sex and girls on the toilet. Her goal? Opening up the conversation around menstruation.

Period relief is hard to come by, but the makers of this coloring book for adults claim to have the solution with their Period Problems Coloring Book. This book will help you relax through mandala coloring. It’s also filled with relatable and hilarious quotes about periods that will have you releasing your anger and frustration on the pages in no time! Know someone who suffers from cramps, PMS or anything else period-related? A copy of this book makes for a great gift.