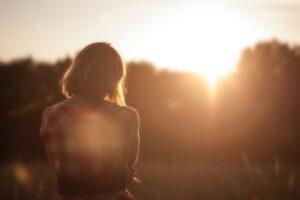 Like any normal teenager, I started menstruating at the age of 12. Then after a year, my periods just stopped. I was struggling to concentrate at school and the nights were hell: waking up dripping with sweat and just feeling weird. That’s literally how I described it to my mum one day: ‘I don’t feel like me, I feel weird’. So off we went to the doctor. After explaining what was going on, I was referred for a blood test and an ultrasound. Two weeks later, a consultant gynaecologist confirmed I had reached menopause and that I needed to start taking hormone replacement therapy (HRT) tablets.

‘Being only 14 years old, I had no clue what the consultant was talking about’

I will never forget that day, sitting on the bed in a hospital room waiting for the consultant to come and then hearing those words. My mum bawling her eyes out and me comforting her. Asking her to not cry as it’s OK. Thing is, it wasn’t OK at all, but back then I had no clue what the consultant was even talking about. I was 14 years old and I was just told I had reached menopause. They also said I had a small womb and only one ovary. That was the first and the last time I saw my consultant. I’m now 39 years old and I’ve literally never been contacted since. No follow-up appointments, no help, no guidance to understand what had happened to me. Nothing. I was put on a daily dose of Prempak-C (a HRT product which causes a monthly bleed) and left to just get on with it.

When Prempak-C was discontinued a few years ago, my doctor didn’t even inform me. The pharmacist told me when I went to pick up my meds. Meds, may I add, that I have to pay for… which I find astonishing. Luckily after a long phone call I managed to get a GP appointment the next day. The GP told me there was no exact alternative to Prempak-C and put me on another brand. It was horrendous. All my hormone levels went crazy. My symptoms returned and my bleeds – yes, I still bleed every month even though I don’t get a period – were incredibly painful. I then was changed onto Femoston which I luckily had no problems with. Or so I thought… Since telling my story, menopause expert Dr. Louise Newson has reached out to me and soon picked up that I was actually on the wrong HRT. She has changed my medication to Evorel 100mg patches, which I constantly wear two of, changing them twice a week. Plus a Utrogestan 100mg capsule in the evening which hopefully helps me sleep, as insomnia was my worst symptom.

Premature menopause. Hormone replacement therapy. Womb. Menopausal symptoms. Ovary. As a child, I needed to learn what all these things meant. Back then, there was hardly any information about this on the internet. Even to this day, material explaining to a teenager with premature menopause what exactly is happening to them, is limited. This needs addressing; I felt lost for years because I just didn’t understand it all. Medical professionals looked at me like I was some sort of freak. If I was given a pound every single time a doctor or nurse has said to me ‘You poor girl!’ when I answered the dreaded question ‘What medication do you take?’ I’d have had loads of work done on myself. Which leads me to how I felt growing up, hating what I saw looking back at me in the mirror. The one job a woman is given to do, and I couldn’t even do it properly. I felt like a failure. A failure as a woman.

‘To make a baby, you need an egg and sperm. I don’t have eggs. End of story’

I can’t say I grew up depressed; I just learnt how to cope. However, I grew up not liking my appearance. I suppose I felt insecure about myself.  I struggled with relationships with guys, as I one day I was going to have to tell them I couldn’t have kids as my ovary had stopped producing eggs. When I did tell them, they didn’t understand. Neither did my friends. I even lost a friend over it who said I was lying and that it was a sick thing to make up. Charming, hey…? The response I got from the close few I did tell, was always the same: ‘It will happen one day mate. Loads of women are told they can’t have kids, but eventually they do.’ Nobody understood what I was saying. They’ve never received any education about the subject of premature menopause, so they don’t know what it means. Even to this day, people still don’t understand. I usually explain it like this: to make a baby, you need an egg and sperm. I don’t have eggs. End of story.’

Sooner or later, it happens to all of us females

Recently, I decided I was ready to talk about my experience out loud, in the hope to raise more awareness. To help educate women about the fact that premature menopause can happen at such a young age. Many women are still unaware of this. I’ve even been called a liar in some so-called ‘menopause support groups’ on Facebook, as people don’t believe this can happen. I’m sharing my story to help mothers; if their daughters are showing any signs, get them to a doctor as soon as possible. I also want women to stand their ground when meeting their GP, push for them to listen to you. Because it still looks like doctors are in denial about the fact that menopause can happen to young women. Last, but not least, I want women in similar situations to speak out – don’t hide it all inside because you feel everyone will be gossiping about you. The menopause happens to all of us females one day. Unfortunately, there’s no minimum age limit on it, which I’m living proof of…

Hayley Cockman is from Essex (UK) where she works as an office manager. Recently, she decided to speak up about reaching menopause at the age of 14. She hopes that by sharing her story, she can help other women and health professionals realise that premature menopause can happen at such a young age. Follow Hayley on Instagram or her blog.

Photo above by Leon Biss via Unsplash.

Period! is an independent, online magazine about all aspects of menstruation. Period! is not intended as a substitute for medical advice. If you’re suffering from medical complaints, always visit your doctor or GP. Editorial articles can contain affiliate links. Sponsored collaborations can be found in the category Spotlight. Do you have any questions? Check our Contact page.

Also read:
Perimenopause: it’s sooner than you think, by Kate Codrington
Why regular gynaecological check-ups should be the norm, by Dafina Malovska
6 Signs you might be in perimenopause, by Emily Barclay
Stop financially punishing my vagina!, by Amy Aylmer
Why did I ever think this was normal?, by Clare Knox

Want to submit an article as well? Read the guidelines.