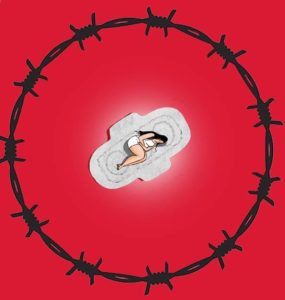 Managing your menstruation can be a challenge. Especially in India, where millions of girls lack menstrual hygiene facilities. This leads to women dropping out of school due to period poverty and even to women dying because of infections they get from using literally anything to manage their menstruation. The Indian social enterprise She Wings, which focuses on female health and hygiene, works hard to eradicate period poverty in the country. She Wings co-founder Madan Mohit Bhardwaj explains: ‘It’s our vision to make India a place where every woman, irrespective of her background or financial status, has the access to safe sanitary products.’

To achieve this goal, She Wings educates women about sanitary products and how to use them. They also hold conclaves to create awareness around menstruation, like the Menstrual Hygiene Camp. These meetings are joined by important Indian policy makers and renowned celebrities. Their worldwide campaign #YesIBleed was held with the aim of normalising periods, something which is very necessary as menstruation is still seen as a taboo in India. They also work on promoting the ‘Red Dot’ concept, where a red dot is drawn on wrapped sanitary waste so waste workers can identify this waste easier and deal with it accordingly. Bhardwaj explains: ‘In most Western countries, the population is looked after in some way or the other by the government. In a developing country like India, the population is so huge that government facilities can’t cover it. The lack of education and affordability of sanitary products is another factor.’

One of She Wings’ most recent initiatives is having their own biodegradable sanitary product line placed in the bathroom of the rooms in the Crown Plaza hotel in Noida. ‘They’re part of the washroom essentials, so you don’t have to ask for them. They’re literally within the reach of a woman in need, so she doesn’t have to feel hassled or inconvenienced when needing a pad. This action has been received surprisingly well. I noticed women around me being inconvenienced when products weren’t available when they needed them, and wondered why sanitary pads aren’t already a basic amenity in the washroom?’ says Bhardwaj. He’s right of course. After all; toilet paper is also at hand in every bathroom.

Next to their campaigns and presence in Indian society, She Wings is also active online. Their tagline: ‘We don’t need to speak in ‘low tones’ about menstruation. Let’s make as much noise as we can!’ There’s certainly no hushed voice on their website; articles range from features on Indian stars like Bollywood actress Amy Jackson to menstruation-related problems such as PCOS and period pain. There’s an article which makes readers aware of the ingredients used in sanitary pads and, very touching, a post about a taxi driver in West Bengal who cleaned up his passenger’s period stain with a smile. Because it’s just a stain, ‘Many more people spill tea or coffee over the seat’. Sharing stories like these, She Wings is paving the way for an India free of period taboos.