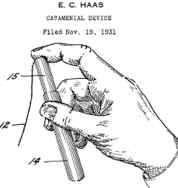 Just like sanitary towels, tampons also have a link with the war industry. During World War 1, nurses produced their own tampons that were made of cotton wool.

This information was brought back home by soldiers and in 1931 the American doctor Earle Cleveland Haas applied for a patent on Tampax, which comes from the words ‘tampon’ and ‘vaginal pack’. He sells this pattent to business woman Gertrude Tendrich, for 32,000 USD. She starts a company named … Tampax. The first Tampax tampon with applicator was produced in 1936. The first magazine ad was launched in the same year.

In 1947 the German engineer Carl Hahn saw an American tampon advert. Together with the gynecologist dr. Judith Esser and lawyer dr. Heinz Mittag he then came up with o.b. (which stands for ‘ohne Binde’, or ‘without (a) pad’). These tampons without applicator are still made, in an improved version, by the same company: Johnson & Johnson. The machines in Hahn’s company, which were meant to produce bullets, turned out to be ideal for producing tampons as well. This is the reason o.b. tampons weren’t mass produced until after World War 2.

However, tampons have been around way longer than since the 1930’s. In the old Egyptian times, around 1550 B.C, women used soft papyrus tampons. And Hippocrates documented in 500 B.C. how Greek women would wrap lint around pieces of wood to control their menstruation.