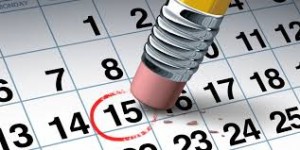 The average menstruation lasts for 5 days. However, there are also women who only have their period for 2-3 days a month. And if you’re unlucky, the bleeding can continue for 7 days or even longer.

More averages: everything between 2 and 10 days is considered normal. The bleeding is mostly the heaviest on the second and third day. It can also happen that the menstruation stops after a few days, then stays away for a few hours or even for a day, and then suddenly continues. That’s nothing to worry about.

Girls who have just started menstruating and women just before their menopause normally menstruate for longer than all the women in between those two groups. Periods of up to 12 days aren’t uncommon.

Read also:
Periods at an early age, why?
Menstrual synchrony: fact or fiction?