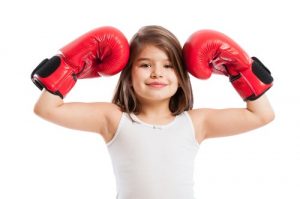 The 11th of October is International Day of the Girl. This day addresses the needs and challenges girls around the world face. Like avoiding child marriage, obtaining equal opportunities and protecting themselves against unwanted pregnancy, sexually transmitted diseases and gender-based violence. But also: dealing with the taboo on menstruation.

Because this taboo leads to girls in rural Uganda dropping out of school because they can’t afford sanitary products, girls in Kenya using rags, leaves and even mud as alternatives to pads, and girls in some parts of Nepal being banned to a clay shed during their menstruation. The situation isn’t helped by peculiar period prejudices, like the Nigerian belief that the touch of a menstruating girl or woman will cause a plant to die.

Choosing between food or tampons

The examples above are of so-called third world countries, but menstruation is also an issue closer to home. With UK research indicating that women spend over £18,000 on their menstruation in their lifetime, period poverty also exists here in Europe, the USA and Canada. For example among the homeless. And in families on benefits or those with a lower income, who are sometimes faced with the question ‘Do I spend the money on sanitary products or on food?’

This period poverty has resulted in schoolgirls in Leeds skipping classes every month, as was reported by UK charity Freedom4Girls earlier this year. Shame is an issue here as well. Because of the menstruation taboo, girls don’t want their classmates or teachers to know and some women aren’t comfortable asking for free tampons or pads at their local food bank. 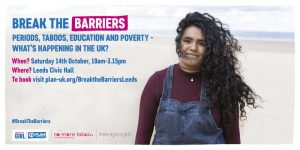 In celebration of International Day of the Girl 2017, activities and events aimed to improve girls’ lives will be organised all over the world. One of them is Break the Barriers in Leeds (UK), hosted by No More Taboo, Plan UK and Freedom4Girls. In this first Period Poverty Summit, practitioners, charities, NGOs, educators, activists, politicians and councillors will look at the issues around menstruation that influence young people in the UK. Talks will focus on education around menstruation, society’s attitudes and access to sanitary products.

Want to join the event?